This primer is intended for those who are familiar with traditonal UPC bar codes and wish to “come up to speed” quickly on this new bar code called “QR Code.

This white paper “QR Code Primer for UPC Printers” can be downloaded in its entirety as a PDF file.

What is a QR Code

A QR Code is a 2 dimensional symbol which means that it encodes data in square cells which are either dark or
light.  The cells are arranged in a particular pattern that can be recognized
and deciphered when the symbol is read.In stark contrast to UPC symbols, QR
Codes do not encode their information as a function of the relative widths of
parallel lines.

QR Code is a matrix of square cells called modules

QR Code is a matrix of

Why am I seeing QR Code all of a sudden?

Although QR Codes (as well as other 2D symbols) have been around for quite a while, most packaging printers have not encountered them because UPC was the only symbol required on a package.

There are several reasons that QR Codes are popping up all of a sudden:

Nearly every one has a cell phone, and many of these cell phones are so called “smart phones”.  Smart phones can access the internet. When someone scans a QR Code with their smart phone, they
are instantly connected to a website, enabling marketers to provide additional
information to a prospective customer.

How do I print QR Codes

5) Proof final artwork with a
verifier

7) Check the QR Codes in production
using a verifier

Although a number of websites
provide the capability of generating QR Code symbols for free, these vary in
their output quality.  We recommend professional quality bar code generation
software similar to what you would use to generate quality UPC symbol graphics.

What colors can be used in a QR Code?

It is best to create QR Codes in a
dark color on a light background, similar to the way UPC codes are made.
Although smart phones can read QR Codes that are printed in red, or even in a
combination of colors (which may be attractive for marketing reasons), doing so
will make it difficult to read these codes with regular bar code readers and
bar code verifiers.  Therefore, it is best to avoid red, orange, purple and
even some light brown colors (which contain some red) for the dark elements of
a QR Code symbol.

What are the main features of a QR Code?

QR Codes are recognizable by their
“square within squares” patterns in three corners of the symbol.  These are the
main features that are used by a reader to recognize a QR Code and decode its
data.  QR codes also have two “clock tracks” that alternate, light and dark.
The clock tracks are hard to pick out of the symbol because they are inside the
symbol.  They proceed from the bottom right corner of the finder pattern at the
top left of the symbol, one going down to the bottom finder pattern, the other
going across to the finder pattern at the upper right.

Do QR Codes have to oriented a certain way?

No.  QR Codes can be printed in any
orientation and read in any orientation.  The words vertical and horizontal,
upper left, upper right, etc. are only convenient ways of describing the
symbol, based on its normal orientation which is that shown above.

What is the official specification for QR Code?

The official specification for QR
Code is ISO/IEC 18004, which is a document that describes how the symbol is
structured, including the finder patterns, the clock tracks, and the data.

How Are QR Codes Checked?

The specification for QR Code,
ISO/IEC 18004 mandates the allowed amount of finder pattern accuracy that must
be maintained for the symbol to be valid.

What if I don’t want to buy and read such a long and complicated technical ISO document, but I do want to know more technical details about the grading parameters for QR Code print quality?

You can read Webscan’s QR Code Grading White Paper which can be downloaded from http://www.webscaninc.com/qr101.  The following excerpt is from that white paper. 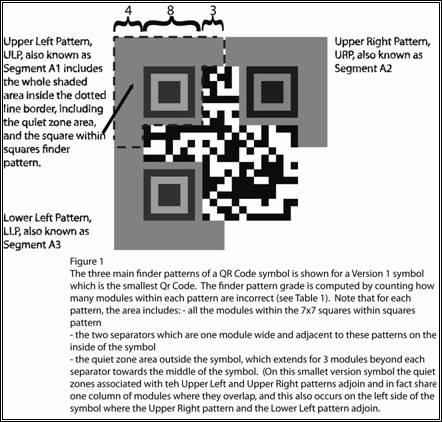 What is the acceptable quality grade for a QR Code?

There are a number of industry standards for particular applications, but for marketing QR Codes that are
intended to be read by cell phones there is no strict industry standard, only
recommendations from marketing firms and from companies like Webscan.  Our
recommendation is a minimum C grade according to ISO/IEC 18004 and ISO/IEC
15415 under the conditions of 660 nm light and a 10 mil aperture size.  This is
expressed technically as a minimum grade of 2.0/10/660.